From Silence to Celebration 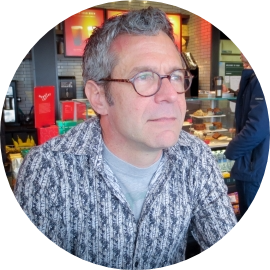 2019 has been a transformative one for Todd Fuqua: the Damien Center asked him to share his story—and his status. Todd is HIV positive.

To Hell and Back

In 2010, Todd lost his job as an IT director at Eli Lilly due to a drug-related felony. The ensuing years were a struggle, as he continued to battle with his addiction, depression and thoughts of suicide. He had casual sex with multiple partners without protection or regular STD testing. In 2012, he found himself in the hospital with a form of sepsis, resulting from untreated and misdiagnosed stage-2 syphilis. It was in that hospital bed that he also received a diagnosis that he was HIV positive.

“I knew this was a possibility, and I just didn’t care,” says Todd. He was living his life with reckless abandon and his actions caught up to him. The HIV couldn’t kill him yet, but the syphilis nearly did.

Rock bottom was the place he landed and with help from friends and family, he sought treatment for his drug addiction. And he headed to the Damien Center for help navigating the new normal of his HIV diagnosis.

Damien Center is Indiana’s oldest and largest AIDS service organization. When it opened its doors in 1997, the center helped AIDS patients die with dignity. Today, it has become a holistic, one-stop shop provider for people affected by or at risk for becoming HIV positive.

“The coordination of care and wrap-around services they provide are outstanding. Clients can go to one place for medical and mental health services. They help with billing and insurance. There is a food pantry, an in-house pharmacy and housing assistance too.”

Today, Todd’s regimen includes regular appointments at Damien Center to monitor his blood work, checking his viral load and keeping a close eye out for side effects from the drugs which he’ll be on the rest of his life. The nearly $3,000 monthly price tag is paid for by insurance Damien Center helped him apply for. He also attends regular individual, couples and group therapy – and sees Dr. Cooper as his “GP” for non-HIV related healthcare.

“In Indiana we really are blessed. One thing we do really well is HIV care. Part of that is due to Ryan White and his legacy, but I also firmly believe that a lot of it has to do with the Damien Center.”

There is a stigma with your status being public which Todd had to overcome.

“After I came out as HIV positive, a young man I had known for several years disclosed his status to me – and his struggles to stay in HIV care. I hadn’t ever shared my status with him. I felt bad about that. Perhaps I could have helped him get back into regular HIV care sooner. I came to realize it’s important to let people know they’re not alone, and I can offer positive energy. I’m not saying everyone should share, but I wanted to.”

By sharing, he can figuratively and literally wrap his arms around another person who has just received the gut punch that an HIV/AIDS diagnosis brings. “I learned in recovery that we are as sick as our secrets. It was time to move on from the guilt and the shame,” says Todd.

Perhaps no other result of any life choice has had a stigma attached to it like the AIDS epidemic. Indiana is rampant with people who suffer illnesses from not eating right or exercising. Even smokers who are diagnosed with lung cancer are spared the same critical eye an HIV/AIDS patient receives.

Perhaps that’s why support is needed even more. There is healing in the sharing.

After spending the better part of this year talking about his own journey, Todd is doing well! He runs a photography business, has been in a steady relationship for five years, and is healthy. The HIV virus in Todd is now undetectable. The development of effective antiviral drugs to halt the rapid reproduction of the infection is one of the greatest medical advances in recent history.

Next up for Todd is a photography project he calls a digital celebration quilt, on Dec. 1, 2020 (World AIDS Day). Unlike the AIDS quilts of the 80s and 90s, which memorialized victims of the disease, this will be a compilation of survivors. “I’m building on the recent global #UequalsU campaign that focuses on the fact that an undetectable viral load equals an untransmittable virus,” says Todd. “I want to start a movement that celebrates years of being ‘undetectable,’ much like we celebrate years in recovery from addiction or years in remission from cancer. So my project will be called ‘Celebrate UU!” He is looking forward to capturing people living with HIV/AIDS on camera, and telling their story. He is currently looking for a space for an accompanying photo exhibition. “Photography helps me face my disease where I can tell my story.”

And by telling his story, he may not realize that he and Damien Center’s namesake have the heart of a healer in common. Fr. Damien was a Catholic priest who tended to a lepers’ colony in Hawaii during the 1800s; he was canonized in 2009. In a ceremony honoring Fr. Damien, Honolulu Bishop Larry Silva said, “His saintly heroism reminds us that by following his example, we may all be renewed in our dedication to those brothers and sisters who are most in need.”

Not a bad legacy to carry on.