Have questions about HIV? Let's start with the basics.

In the United States, 1.2 million people are living with HIV, or Human Immunodeficiency Virus, which weakens the immune system by destroying important cells that fight disease and infection. 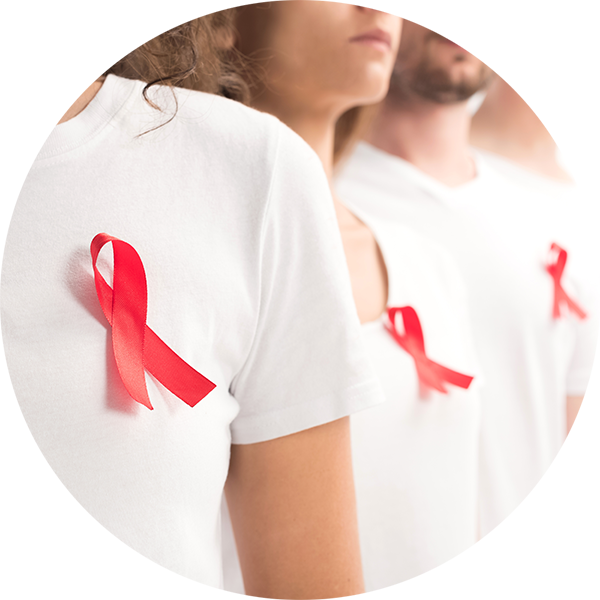 Discovered in 1981 by the U.S. Centers for Disease Control and Prevention (CDC), HIV/AIDS affects all races, genders, sexual preferences, and ages. While no cure for HIV has yet been developed – meaning once you acquire HIV, you have HIV for life – current treatments can give people living with HIV a nearly-normal lifespan and lower or eliminate their risk transmitting HIV to others.

HIV first emerged as a mysterious immune deficiency that was believed to only impact gay men, but it was soon learned that HIV could impact anyone in the community. In Indiana, Damien Center serves about 25% of the total population of people living with HIV with the goal of reducing their HIV viral loads (the amount of HIV in the body) and increasing CD4 levels (the amount of healthy, immune-boosting cells in the body). Reducing viral load makes the individual living with HIV both healthier and less likely to pass the virus on to others, which in turn improves the health of our community. Of the 1.2 million people living with HIV in the United States, almost one in seven, or 14%, are unaware of their infection – and when you don't know you're infected with HIV, you're much more likely to pass it on to another person.

Over the past decade, the number of people living with HIV in The United States has increased, while the annual number of new HIV infections -- about 50,000, according to the CDC -- has remained relatively stable. Transgender women and gay, bisexual, and other men who have sex with men (MSM) are most seriously affected by HIV; by race, blacks/African Americans are disproportionately affected by HIV. Other growing risk groups include African American women, Hispanics/Latinos, and youth.

Have Questions About HIV?

About 1.1 million people in the United States were living with HIV at the end of 2015, the most recent year this information was available. Of those people, around 15% (1 in 7) do not know they are infected.

By geography: HIV is largely an urban disease, with most cases occurring in metropolitan areas with 500,000 or more people. However, HIV is not just isolated to metropolitan areas, rural areas can be effected as well. The South has the highest number of individuals living with HIV, but when you take population size into account, the Northeast has the highest rate of persons living with new HIV infections.

By the end of December 2017, a total of 12,635 persons were living with HIV/AIDS in Indiana. Most people living with HIV/AIDS in Indiana are concentrated in the urban areas of the state, however rural areas can also be affected. The majority live in Central Indiana and the Indianapolis Metropolitan area.The disease continues to be male dominated, with the number of diagnosed males just over four times higher than that of females. In 2017, the breakdown by ethnicity for those with the disease were: White - 48.4%, Black - 38%, Hispanic - 8.9%, Other - 4.7%.

Sub-Saharan Africa bears the biggest burden of HIV/AIDS, with almost 70% of the global total of new HIV infections for 2013. Other regions significantly affected by HIV/AIDS include Asia and the Pacific, Latin America and the Caribbean, and Eastern Europe and Central Asia.

Let's start with the basics. Check out our FAQs below for answers to your most common questions.

What does HIV mean?

What does AIDS mean?

What is the difference between HIV and AIDS?

HIV is the virus that causes a person to develop AIDS. AIDS is a diagnosis given to individuals that are HIV positive when their immune system has weakened enough to make them vulnerable to life-threatening infections.

How is HIV transmitted?

HIV is transmitted through body fluids. Blood, semen, vaginal fluid and breast milk are the only four fluids that are able to transmit HIV from one person to another.

What is an STD/STI?

Do I have to have my blood drawn to be tested for HIV?

How long will it take to learn my test results?

Our rapid-response HIV test results are available within minutes. Other STD/STI testing results may take up to two weeks to process.

How frequently should I be tested?

Testing frequency should be based on your level of risk. It may take up to 3 months after exposure to detect HIV antibodies. It is generally suggested that sexually active individuals get tested in six month intervals.

What are the signs/symptoms of HIV?

There are no reliable signs or symptoms associated with HIV infection. Many people who test positive for the virus have no indication anything is wrong with their health.

What if I have symptoms of another STI?

If you are exhibiting signs or symptoms (itching, burning, rash) of a STI or know you have a sexual partner that has tested positive for a STI, you should seek treatment with a medical provider. If you do not have a medical provider and need resources for treatment, our testing counselors can help connect you with those services.

Since there is no cure for HIV, a person will have HIV for life, and without the proper medications, HIV can ultimately lead to death. Fortunately, remarkable advances in science and technology mean that HIV is now a chronic manageable disease, so that people who have HIV can lead long, healthy lives if they get proper medical treatment. Current HIV treatments also allow individuals with HIV to drastically reduce their risk of transmitting HIV to others, including sexual partners and, for females, unborn children.

There are now five different classes of HIV drugs, each attacking the virus at different points in its life cycle. People taking HIV medications will generally take three different antiretroviral drugs from two different classes. This regimen, often referred to as Highly Active Antiretroviral Therapy (HAART or ART), is the standard for HIV treatment, and gives individuals with HIV the best opportunity to control the amount of HIV in their body, protect their immune system, and protect against drug resistance.

Taking HIV medications is critical to lowering HIV viral load (the amount of HIV in the body) and increasing CD4 levels (the amount of healthy, immune-boosting cells in the body). Getting and staying on medical treatment is the key to long-term success, and for people living with HIV, achieving overall wellness requires a comprehensive approach.

At Damien Center, we focus on each patient's unique needs as they work toward getting and staying on HIV medications. When patients are stable in all areas of their lives, they are able to adhere to the medical treatment that leads to undetectable viral loads. With this goal in mind, Damien Center conveniently provides a wide range of programs and services under one roof, making it easy for our patients to access all the care and support available.